Election Day 2020 is rapidly approaching.  We hope those eligible to vote will make their voices heard on November 3rd.  We certainly look forward to exercising what is both a right and a privilege.

By this point in the election cycle, we’ve heard plenty of “If I’m elected…” speeches and have a pretty good idea which candidates will get our votes.  News outlets are filled with stories on how proposed legislation might impact life here in Texas and in the broader United States and how that potential future legislation hinges on the outcome of this year’s election.

We’re in the investments business, so we’re thinking about how those policies might impact the strategies we employ for our clients.  From a big picture perspective, however, the outcome won’t dramatically alter our investment process.

We strongly believe it pays to stay invested in stocks with an eye on the long-term upward trend in stock prices, though we may add or trim exposure around the edges when prudent.  Certainly, there are some inevitable stumbles along the way, but the trend has been investors’ friend.  That being said, policy proposals that look likely to become enacted law might impact what market sectors we favor and what companies we favor within sectors.

Prediction market probabilities on PredictIt.org show only the House outcome looks fairly certain at present, with an 80+% probability the Democrats retain a majority.  The races for the Presidency and Senate majority are much tighter and indicate either party could emerge the victor.

One question on investors’ minds is whether election outcomes that don’t fit their way of thinking or voting should impact overall positioning and asset allocation.  We would suggest that a calculated and objective answer to that question is “no”, as elections have seldom if ever served as turning points in longer-term economic or market trends. 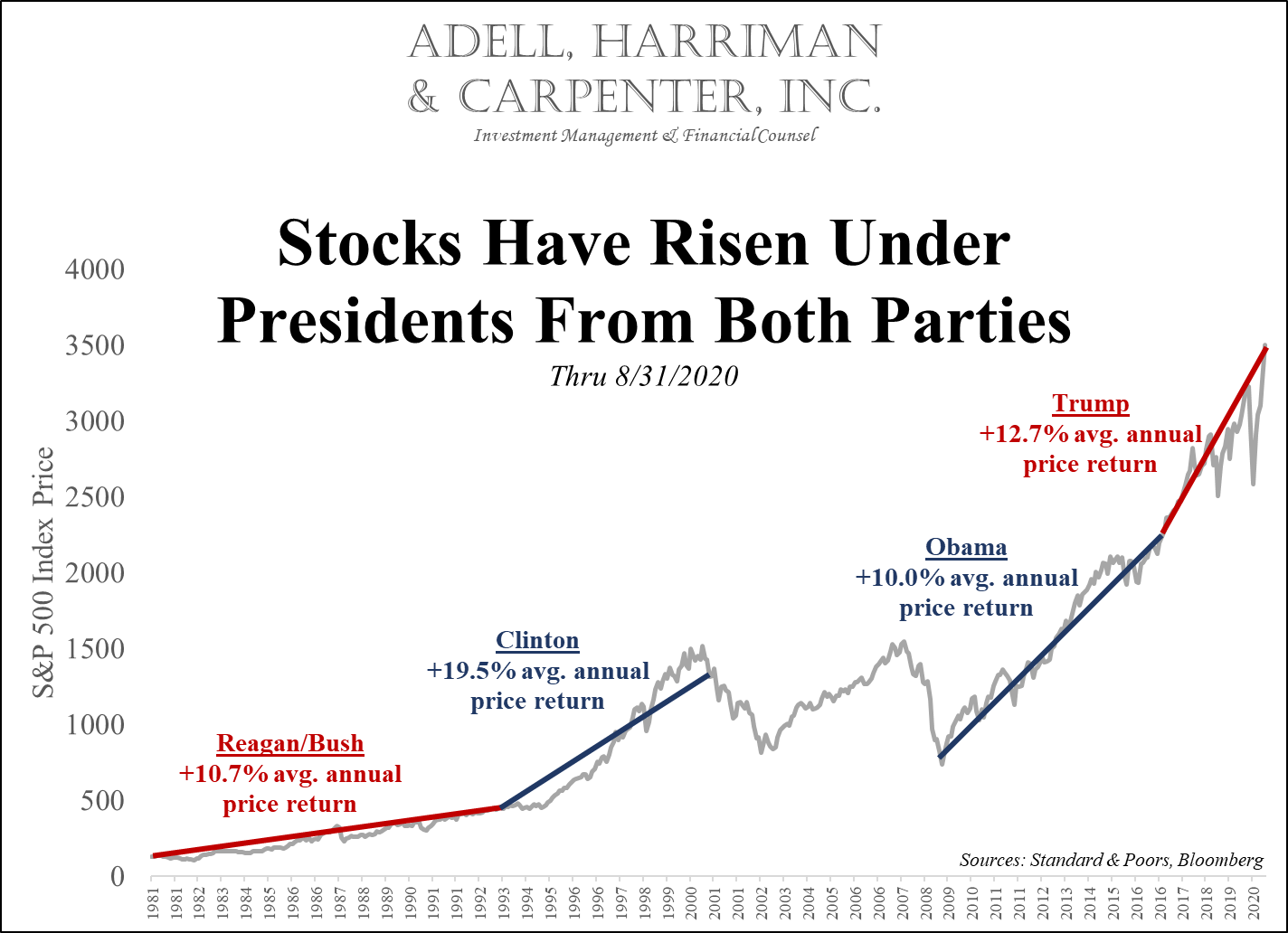 Investors who dumped stocks because Republicans Ronald Reagan and George H. W. Bush were elected President back-to-back would’ve missed out on twelve years where stocks were up around 10.7% per year on average.

Investors who dumped stocks because Democrat Bill Clinton was elected would’ve missed eight years where stocks were up 19.5% per year on average.

Investors who dumped stocks because Democrat Barack Obama was elected would’ve missed eight years where stocks were up 10.0% per year on average.

Investors who dumped stocks when Republican Donald Trump was elected in 2016 have missed 12.7% per year of upside in stocks on average.

What happens if the Democrats sweep the Presidency, the Senate majority and the House majority?  History says stocks rise 8.0% per year on average when that’s the order of power.

That return isn’t appreciably different than the average 8.9% rise per year in stock prices when Republicans rule the roost in Washington.

We urge voters to make their voices heard in the 2020 elections.  We’d also urge investors who don’t like the election results to look at the historical data, hold their noses and stick with a well-designed, long-term investing plan.

Fill out the form below and one of our principals will contact you to begin the next step.