Buy At The Highs

BUY AT THE HIGHS? 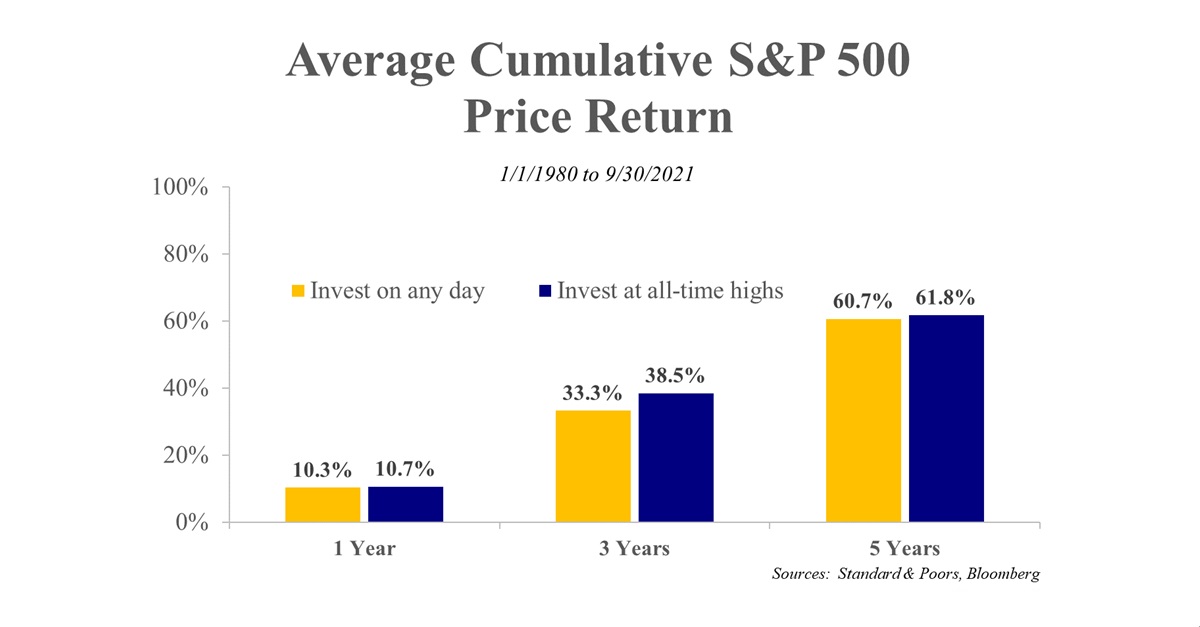 Investors often ask if it’s time to dial down stock market exposure when the broad market hits new high prices.  If market appreciation has pushed stocks to an outsized portion of overall holdings, then doing a bit of pruning could make a lot of sense.  Disciplined investors execute such moves regularly, but not merely reflexively because the S&P 500 hits a new record close.

Investors also ask if it’s prudent to invest fresh cash with the market at highs.  For those who believe the long-term trend in stock prices is higher, as has been the case historically, it’s never a terrible time to buy stocks just because of price levels.  Prices may pull back from those highs, but they’ve eventually pushed thru to new highs.

The old adage is to “buy low and sell high”.  A more accurate recommendation would be to buy and keep buying as available funds allow.  With history as a guide, investors would have been buying at lower prices than the future would hold.  Stock prices may gyrate, but they’ve gyrated around an upward trend rather than simply bouncing between “high” and “low”.

One strategy to eventually get fully invested is to utilize “dollar cost averaging” by investing smaller sums on something of a schedule.  Some purchases will end up looking more opportune than others, but the total amount eventually gets invested and emotion gets removed from the equation.  Many investors have been dollar cost averaging for years – perhaps without realizing it – as they’ve deposited part of each paycheck into a 401k or similar account.

It may be intuitively appealing to think there’s a better time to buy than “at the new high”.  Veteran investors know that in the typical calendar year the broad market pulls back 5% from a near-term high two or three times.  On average, the market experiences a 10% “correction” every twelve to eighteen months.  These moves are simply a feature of the stock market, even when the broader price trend is upward.  Investors waiting on one of those 5% pullbacks might miss out on a 10% advance before that “buying opportunity” occurs.  Investors waiting on a 10% pullback might similarly miss out on an even larger upward move.  In either case, investors would have been better off experiencing the selloff than sitting on the sidelines.

Intuition may say one thing, but what do the facts say?  How would investor returns buying at new highs compare to simply buying on any random day?  As it turns out, buying at the new high would have been a pretty successful strategy that outperformed “random day” purchases since 1980 over the following one-year, three-year and five-year periods.

Step back and it actually makes a lot of sense.  The stock market often sets a running series of new highs.  That’s what defines a bull market!

As the data illustrates, being invested makes a bigger difference than investment purchase timing.